Skip to content
by Francisco Solano Olarte on December 26, 2018

Late Marvel founder and creator of several of the brands’ superheroes, Stan Lee wields the Infinity Gauntlet in this super cool custom Funko Pop! With his glasses turned into shades and a casual outfit, this custom Pop! includes the Infinity Gauntlet with all six Infinity Stones. It seems the Gauntlet was from a Thanos Avengers: Infinity War Pop! Check it out: 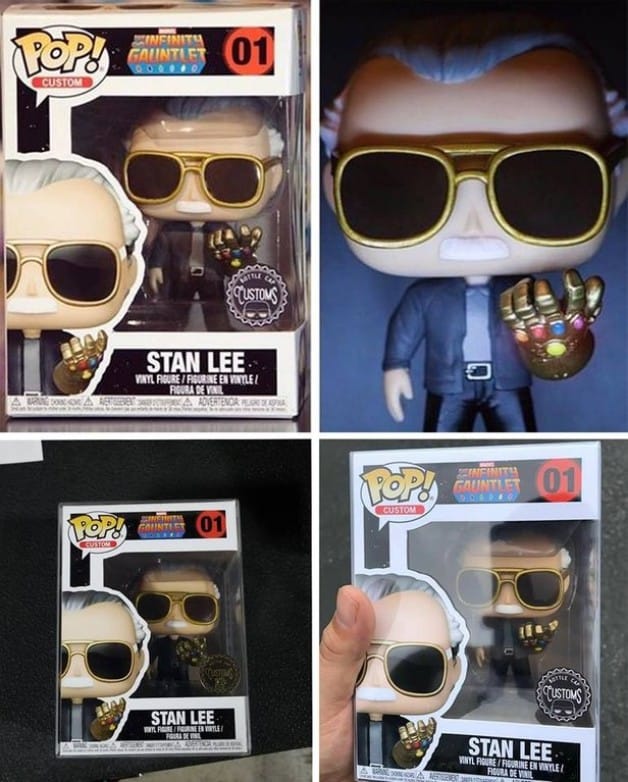 Disney-Fox Deal Expected To Close At The End Of January

According to the listing selling the figurine on eBay, this Pop! sells for about $ 125 US dollars. This collectible is not available in stores, though. Actually, very few are. Toymaker Funko has sold Stan Lee Pop!s through special events like comic conventions and, more recently, they sold versions of his cameos in specific stores. According to PopPriceGuide, the cheapest Lee Pop! goes for about $ 21 and its the Captain Amerca: The First Avenger where he’s a General and the most expensive is a red metallic exclusive from LA Comic-Con for about $800.

Stan Lee passed away last November 12 at the age of 95 years old after being rushed to the hospital due to an emergency. Lee was one of the most influential personalities in the comic book world as he helped shape Marvel into a profitable industry which led to TV series, movies, books, and several other media. He helped create Spider-Man, the X-Men, Iron Man, Thor, the Hulk, the Fantastic Four, Black Panther, Daredevil, Doctor Strange, Scarlet Witch, and Ant-Man among others. He also became prominent in pop culture by doing cameos in Marvel movies.

What do you think about the custom Infinity Gauntlet Pop! Do you own a Stan Lee Pop!? Let us know below!