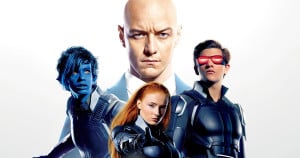 It’s been a tumultuous journey for the X-Men movies. A franchise that’ll forever have both X2: X-Men United and X-Men Origins: Wolverine attached to its name — no matter how many times the producers decide to push the restart button — the 20th Century Fox-owned superhero series is not without its high and low points. Often in equal measures too. And with all that said, X-Men: Apocalypse, the latest chapter, certainly has its fair share of both. While the newest blockbuster to the property has all the appropriate gravitas, moral weight and high stakes that have been proudly associated with the film series since it began in 2000, director Bryan Singer sacrifices some of the narrative steadiness and witty humor in favor of a more somber, bleak final chapter to the prequel trilogy. And that doesn’t come without some bumpiness and turbulence. But that’s not to say that this ninth X-Men movie doesn’t rise to the challenge.

Similar to Batman v Superman: Dawn of Justice and Captain America: Civil War, Apocalypse has a lot of story to tell and not a lot of time to tell it. And just like those two recent superhero flicks, Singer and screenwriter Simon Kinberg not only want to study the strength of their superheroes physically, but also psychologically. It opens in Egypt in 3000 BCE and introduces us to En Sabah Nur (Oscar Isaac), a mutant with almost endless powers trapped between the pyramids for thousands of years during a moment of vulnerability. He’s put in an almost eternal sleep, but it’s not long before he’ll be awoken again. From there, we jump to 1983. It’s a different time, in more ways than one, as the mutants are now taught in classes and their identities can no longer be as secretive as they once were, thanks to the events of Days of Future Past.

Xavier’s School for Gifted Youngsters continues to teach and guide the mutants of the world — all under the mindful watch of its wheelchair-bound namesake and main professor (James McAvoy). Aided by fellow professor Hank McCoy (Nicholas Hoult), they soon welcome three new students under their watch: Scott Summers (Tye Sherdian), a.k.a. Cyclops, Kurt Wagner (Kodi Smit-McPhee), a.k.a. Nightcrawler, and Jean Grey (Sophie Turner), all destined to become amongst the most powerful and gifted students Xavier will ever teach. For now, however, they’re merely just a couple plucky, insecure teens, ones still trying to figure out their powers and capabilities. But that’s not going to stop them from helping save the world.

As CIA agent Moira Mactaggert (Rose Byrne) is on assignment in Egypt, she witnesses first-hand Nur’s re-awakening. And he is mighty unhappy with how humanity has changed throughout these last few thousands years. With the fate of the world on the balance of false gods, ones with weapon control beyond their physical control, Nur knows the world is doomed unless he takes a stand. From there, he assumes the identity of Apocalypse: the destroyer of the old world and the inventor of the new. And he’s not going to be able to do it alone. So he recruits the help of some of the strongest mutants in the world: Storm (Alexandra Shipp), Psylocke (Olivia Munn), Angel (Ben Hardy) and Magneto (Michael Fassbender), who has fallen at the hands of humanity and wants to relinquish them from existence in any way he can. But Xavier, Moira and the rest of the team, which also includes a recently-returned Mystique (Jennifer Lawrence), won’t let humanity fall under their watch. That is, if they can help it. But Apocalypse will be the most powerful villain the X-Men have faced yet, and their fight isn’t going to come without some sacrifices along the way.

More so than any other superhero series, including the MCU, the X-Men series knows how to build on their dramatic tension without making it seem too grim or hyperbolic. Singer knows the comic book-inspired world inside and out, especially at this point. And while this new sequel isn’t as smooth sailing as some of his other films — especially coming after Days of Future Past, arguably the best X-Men film to date, and Deadpool, which might very well be the most entertaining and successful superhero movie this year — Singer does a fine job at keeping everything quick-moving, breezy and easy to follow — even when things get a little messy. There’s a lot of globetrotting, character bouncing and narrative jumps here, and that leads to more than a few tonal shifts and awkward humor beats. Sometimes its straight-faced cheesiness is appealing, especially when almost every superhero movie feels the need for real-world consequences. Other times, however, it comes across a little too goofy for its own good, and it kills the tension. I know this is a comic book movie and all but, without getting into spoilers, let’s just say some stuff is perhaps a little too silly and bombastic for its own good. But it does know the value of some well-used schlock, though, which is certainly appealing.

And the acting, more so than usual here, is a little all-over-the-board — especially considering the gifted director at hand. Once again, McAvoy and Fassbender are wonderfully great. They each bring enough morality and emotional weight to their characters to make you feel invested and impacted by their endless struggles with one another, although it’s a shame they didn’t get more time with each other to provide more payoff to their bickering these last two films. Additionally, Hoult is more endearing here than he’s been before in the series, and they don’t really give him enough to do at the end of the day. But there are a lot of wheels spinning here, and it’s easy to understand how he got undercut.

As for the newcomers, Smit-McPhee is the real standout of the bunch, playing well as a member of the time and comic relief character, Shipp is divine in the role Halle Berry once played and, thankfully, Isaac is appropriately menacing as our new big baddie. It’s not easy to make yourself a threat under all that make-up, but Isaac never seem fazed by the challenge. You understand how flawed and messed-up Apocalypse’s logic becomes, but you do understand where he’s coming from and, in some cases, sympathize with him and his conquest. Apocalypse doesn’t really do enough with him by the end, and that’s a shame for more reasons than one. He’s certainly not wasted, but you can’t help but think they could’ve done a little more.

Lawrence is easily the most disappointing of the returning stars. She’s not bad per se, but it’s evident she’s not giving this one her all. She looks disinterested and a little checked out most of the time, and that makes it hard to really get invested in the action when she’s on-screen. Similarly, Turner as Grey just does not work. She rings false in the role, doesn’t have the conviction the role necessities and ultimately becomes the biggest throne in the film’s side. Munn’s performance is similarly weak, but it doesn’t affect Apocalypse enough to really make a big difference. Sheridan is fine as Cyclops, but oddly enough, his role also feels a little limited, and the always lovely Bryne is mostly wasted in an unforgiving returning role.

But I cannot stress this enough: Quicksilver (Evan Peters) is easily the best thing about this third film. Thankfully given more time to play the role, he relishes the part and he gives it his all. His presence is always welcome, and I’m convinced Fox should just give him his own movie. He gets a slow motion sequence that’s on par, if not even better, than the one he got in the last movie — even though, this time, his involvement feels a little too coincidental — and he never failed to get a laugh out of me. Peters fits in the role far more comfortable than Aaron Taylor-Johnson ever could, and I hope they continue to find inventive and fun ways to keep him inside the X-Men series. At the very least, put him in the same room as Deadpool. Their banter back-and-forth would be priceless. He’s a big ace for the studio; lock him down while you can.

The third film in a trilogy is almost always the weakest, and that’s certainly the case here. So much so that Apocalypse takes a moment to admit it itself in a meta little moment of commentary a fourth of the way through. But they don’t let this become an admission of laziness, nor a sign of defeat. Singer’s latest X-Men film may be a little too brooding and a tad discombobulated, but it provides enough spectacle, offers enough heart and provides enough emotional investment to make you root for its success. It’s certainly not the end of the world here, though it could be a sign that, without Deadpool on-screen, Fox’s upcoming sequels run the risk of becoming just as tired as some other, unnamed superhero properties. But they certainly pack a good fight in this one and, though it’s not X-Men‘s finest hour, it’s not their darkest either. It’s better than The Last Stand, at least. And that’s all that matters in the end.