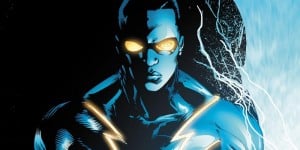 Fox have struck a deal with Greg Berlanti for their next DC Comics series. The network just greenlit a pilot for a one-hour drama based on Black Lightning, the legendary vigilante character. The episode is set to be written by Mara Brock Akil, the creator behind BET’s Being Mary Jane, and her husband Salim Akil. Both will serve as executive producers on the series besides Berlanti and Sarah Schechter.

With the announcement, which leaked last week, Fox also released the following logline.

Jefferson Pierce made his choice. He hung up the suit and his secret identity years ago, but with a daughter hell-bent on justice and a star student being recruited by a local gang, he’ll be pulled back into the fight as the wanted vigilante and DC legend — Black Lightning.

Expect the series to hit somewhere around 2017, perhaps 2018. Details are limited otherwise, and development is still exceptionally early. Despite writing the first episode, the Akils are not predicted to run the series, especially since Being Mary Jane was renewed for a fourth season back in January. But if Noah Hawley can create both Fargo and FX’s upcoming Legion, Mara Brock Akil could serve as the force behind both series. For the time being, however, such details have no been confirmed.

Black Lightning’s on-screen appearances have been limited at best. His most prominent small-screen appearance came from Cartoon Network’s short-lived Young Justice, and this will be his first live-action appearance on the tube. We’ll keep you posted on any other updates whenever they come.