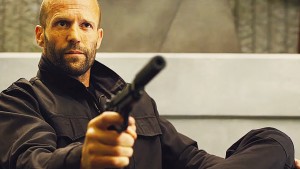 Earlier this month, Dwayne “The Rock” Johnson took to social media to call out some of his “candy ass” male Fast & Furious 8 co-stars who were “too chicken shit to do anything about it.” He didn’t name anyone in particular, but it didn’t take long before Vin Diesel was singled out as the source behind The Rock’s ill-feelings.

While gossip ran wild for the week speculating on what caused the riff between the two muscled-up action superstars, rumors have mostly settled down of late. Production recently wrapped on F. Gary Gray’s blockbuster sequel, and the two heated A-listers more-or-less moved on with their next career steps.

Of course, fans want to hear some more scoop from the sources, so their co-stars will soon get bombarded with questions regarding the matter. The first to field such questions is Jason Statham, now promoting this weekend’s Mechanic: Resurrection. That said, just because you ask him about the matter doesn’t mean he’s going to give you the answers you want to hear. Here’s what he had to say when asked by People.

I stay out of any bickering or any troubles that people have. I have nothing to do with it and I don’t want any part of it… Look, Dwayne’s his own man and what he says he’s entitled to say in his own way, and what he wants to say — you’ve got to ask him.

That’s an admirable non-answer, at least. Statham is reportedly a good friend to Johnson, so it’s rather unsurprising to see him hold back on gossiping upon his buddy’s troubles. But he also doesn’t want to get in the middle of what’s clearly a two-person argument, and that’s understandable certainly. Better to step back and let the two hash it out then get in the middle of the ruckus and get bruised in the process.

Additionally, Statham said he “loved the whole experience” of working on Fast & Furious 8, and he praised the cast and crew and said they were all great and yada, yada, yada. You know the drill.

We’ll have to wait to see if Johnson and Diesel’s feud is visible in the final product when Gary’s new film hits theaters on April 14, 2017. It’ll be interesting to see what the press circuits are like for that one.