The beta dates for Marvel’s Avengers have been announced for players who’ve pre-ordered the Square Enix and Crystal Dynamics game.

With only a few months to go until Marvel’s Avengers hits the shelves, the dates have been released for the beta version of the game for players to try out. Most recently one of the developers behind the new title teased each hero’s powers, noting that each character has an intrinsic ability to give them the edge when fighting MODOK and AIM. But thanks to a new reveal from IGN, those who have already pre-ordered the game on PlayStation will be able to access the game’s beta on August 7.

The reveal also explained that a week later, on August 14, players who pre-ordered Marvel’s Avengers on Xbox and PC can access the beta, as well as an open beta for all PlayStation players. Finally, on August 21, there’ll be an open beta for everyone. This means there’s plenty of opportunities for fans to try out the game before its September release date. Crystal Dynamics will also be hosting another War Table presentation on July 29 which will likely reveal more about the character abilities as well as discussing the mechanics of the game. 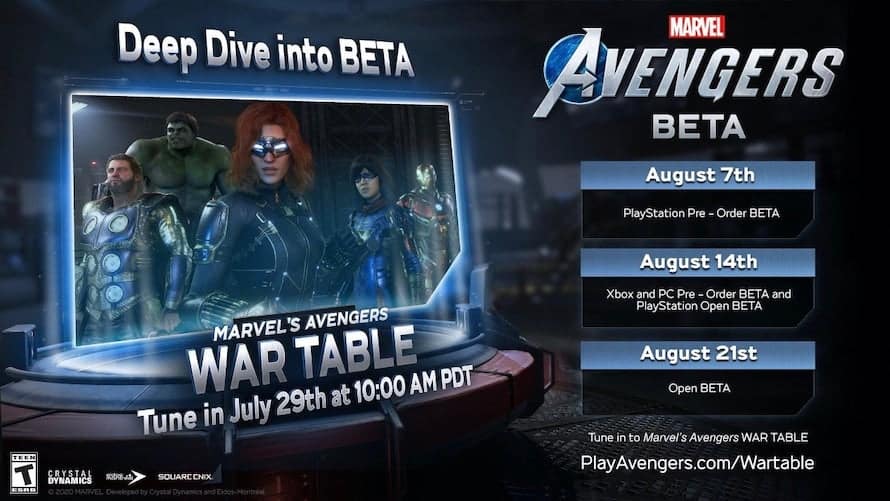 Are you excited for Marvel’s Avengers? Which hero do you want to play as the most? Who else will show up? Sound-off in the comments below!

Here is the official synopsis for the upcoming game:

Marvel’s Avengers begins at A-Day, where Captain America, Iron Man, the Hulk, Black Widow, and Thor are unveiling a hi-tech Avengers Headquarters in San Francisco — including the reveal of their own helicarrier powered by an experimental energy source. The celebration turns deadly when a catastrophic accident results in massive devastation. Blamed for the tragedy, the Avengers disband. Five years later, with all Super Heroes outlawed and the world in peril, the only hope is to reassemble Earth’s Mightiest Heroes.

Featuring regular content updates, Marvel’s Avengers will take players on an epic journey delivered over multiple years. This game is what’s next for the Avengers.

Marvel’s Avengers will be released on September 4, 2020, for Xbox One, PlayStation 4, and PC. The release date for the PS5 and Xbox Series X versions will be announced at a later date. Stay tuned to Heroic Hollywood for the latest news on the upcoming game and be sure to subscribe to our YouTube channel for more content in the future!