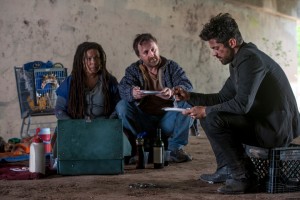 Damn. That was one hell of a good episode of Preacher. In fact, if my opinion is worth anything these days (and, if you’re still reading these, I hope it is), “Finish the Song,” the penultimate episode of this first season, might just be the best one to date. I know, I know, I say that every other episode at that point. I’m practically a broken record. But how can you complain when the AMC series delivers and delivers more times than the actual congregation?

While comparisons to other recent favorites like The Walking Dead, Breaking Bad and Game of Thrones are well-earned, there’s truly no show on television quite like Preacher. The Sam Catlin-run program is a majestic oddity unlike anything else, which is say something based on today’s television landscape. And it proves that it’s only getting better and better as it goes along. Hail be to the powers above! Preacher is once-and-for-all a truly good show, verging on a great one, and “Finish the Song” is just another crowning achievement in its multiple successes.

As we’ve been a few times this season, “Finish the Song” thrusts us back into the old west in 1881, where we’re once again introduced to The Cowboy (Graham McTavish), an outlaw out for justice amongst a sea of no-good American prospectors believing in the falsities of the American Dream. With his daughter and wife the subject of an awful pair of deaths, The Cowboy returns on the Ratwater to kill those nasty, dirty citizens that lived their lives in deceit and malpractice, and he evens the score in his own fashion. That involves a shoot out where everyone — and I mean everyone — in the saloon is mowed down in a glorious spectacle of violence and bloodshed. People are shot down, one by one, on-camera and off, as we watch a local singer croons his heartfelt, soulful song until he, too, finds himself with his head cut clean off while his piano player accompaniment is also given a bullet to the head.

With everyone taken care of, Unforgiven style, The Cowboy gives himself a nice clean shot of whisky, like a real cowboy would do. But as he does so, something peculiar happens around him. The ground, the shelves of liquor, the walls — they all shake. They rattle violently, in fact. But The Cowboy, his eyes heavy and his stare blank, seems to think little of it. It’s as if he’s been through this all before, as if this is as mundane an activity as they come. Before any sense can be made, however, we find ourselves whisked back into present day, where Jesse Custer (Dominic Cooper) is in a hell of his very own.

Now in the back of Sheriff Root’s (W. Earl Brown) police vehicle heading towards the station, he’s asked once again about Eugene’s (Ian Colletti) whereabouts. Jesse, as per his usual self, confesses the truth: that he’s currently in hell. The sheriff, though, pays little mind of this, and begins to tell our local Texas preacher about what happens to child murders who get locked up. But Jesse doesn’t get to hear the full story, as he unchains himself with a silver pen and yanks himself out of the speeding vehicle, but not before he can quip, “I’ll see you on Sunday.” Don’t forget, this incident isn’t his first with law enforcement, and he knows his way out of police custody. The sheriff is naturally peeved, but what can he do? Jesse is gone, completely out of sight, and Root has no idea where he could have gone. I guess he will, indeed, have to wait until Sunday.

Meanwhile, Emily (Lucy Griffiths) also has her own fair share of problems. Receiving another unexpected visit from Tulip (Ruth Negga), she soon learns that Cassidy (Joseph Gilgun), the church’s local shadow dweller, is, in fact, a vampire, and that he is left in a pretty bad shape. After making a firm point to Jesse a few weeks back, he’s left burned and deeply disfigured from the bright rays of the sun, and now he needs replenishment if he wants to survive. Tulip, as we saw last week, has been feeding him local pets and creatures, but that’s not quite doing the trick. The pet store is catching on to Tulip, and they need something a little more substantial.

These are all concerns Tulip leaves upon Emily, as she works her ways toward Albuquerque in order to kill a man, in her own words. Emily, while forever confused, asks very little questions, but that might also be because Tulip is, once again, pestering the poor girl about her relationship with Jesse. At this point, however, Emily can date the man for all she cares. Tulip’s done playing sweet and patient for her one-time boyfriend, but Emily is, as we know, already taken. Or, at least, she also finds her in a kinda-sorta relationship with the town’s bumbling mayor, Miles Person (Ricky Mabe). And their relationship is going to get complicated by the next few scenes.

After a hamster feasting left Emily rather heartbroken, she coldly decides to call the ever-loyal mayor boyfriendish in order to come to her house. She’s vague about the details, but that doesn’t stop Miles. As soon as he comes, however, she slams him into the room, locks him inside and must wait on the other side as she hears him gashed and screaming to his death. Geez. Poor guy. But as we’re lead into this episode to believe, Preacher is not taking any prisoners. You’re either a survivor or you’re dead. Well, unless you can inexplicably regenerate, like our disloyal angels Fiore (Tom Brooke) and DeBlanc (Anatol Yusef).

With little progress made with their preacher, they’ll need to pay a visit to Hell. Granted, this isn’t necessarily their first choice, and while a double coin flip suggests they go back to the man upstairs — even though they might very well be separated for good — they find themselves without their direct phone line, sinceJesse stole it whenever they were in the midst of getting their passports and transportation arrangements for Hell. Even such an unholy trip is given the mundane proceedings of a run-of-the-mill trip to the DMV. It’s wonderful. But not so wonderful is Fiore and DeBlanc’s predicament, where they’re left with no where to go but down below. And they’ll ultimately have to leave their baggage behind, literally, in order for that to happen, much to Fiore’s distain. (Side note: Great nod to Breaking Bad in this moment!) Meanwhile, they’re still on the run from a blonde assassin, and even when they cut off her arms and legs, they still find themselves unable to fight off her repeated attacks.

Meanwhile, Jesse must make amends with a half-burnt Cassidy, which is resolved fairly quickly. They then pack up the mayor’s body and bury it out fair in the desert, the way all best friends do. Meanwhile, Tulip does, indeed, find herself in Albuquerque with a small mallet in hand and a mysterious man tied up, bleeding, half naked and with eyes begging for mercy. All the while, we’re welcomed once again to the tragic existence of our The Cowboy — who we learn, through an extended montage, is in his own personal hell, reliving the worst moments of his life over and over and over and over and over again to the point of numbness. At least, until he’s visited by Fiore and DeBlanc, who ask a favor of him: kill a preacher. Although he kills DeBlanc in the process, The Cowboy listens. And we’ll see if he follows them back to Earth on next week’s season finale. Personally, I can’t wait.

In the meantime, let’s look at this week’s top five moments. Oh yeah, and you should also read our Comic-Con coverage of the Preacher panel. Just throwing it out there.