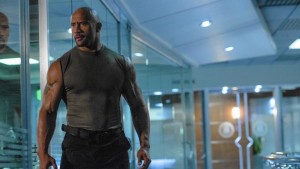 As you probably heard, Dwayne “The Rock” Johnson had some mean things to say to some of his male Fast & Furious 8 co-stars. Set to film his final week on the action sequel, Johnson hit Facebook on Tuesday to call them “candy asses” who were “too chicken shit to do anything about it anyway.” The Internet speculated widely as to who these “candy asses” could be, with star/producer Vin Diesel quickly becoming the number one culprit. While it’s unclear what the beef was between the two muscular movie stars, The Rock wants to settle their differences. Or perhaps he’s trying to save face. In either case, Johnson went onto his Instagram today to clear the air a little bit.

Celebrating his last day of filming, the A-list star shared a set video, which featured his stunt coordinator JJ Perry and several inmate co-stars and extras, where he congratulated the hard work of his fellow team members and exuberantly proclaimed that “there’s no greatness achieved alone.” He also promised one of the “most amazing” prison scenes ever, and let JJ lead them all in a chant. Underneath the video, Johnson elaborated more on his troubled feelings, and let it be known that any hard feelings were simply part of the great collaborative process for this new film.

My FINAL WEEK of shooting #FastAndFurious. There’s no greatness ever achieved alone.. it’s always a team effort. We promised an epic prison break out for you guys and we delivered. HUGE THANK YOU to my ohana (family) stunt coordinator JJ Perry and his bad ass fearless stunt team  — as well as my cousin and incredible stunt double @samoanstuntman. Thank you team for the willingness to “die hard” and drop your blood & sweat daily for our movie. #MyStuntBrothers #Loco4Life You guys reading this know how much I believe in the idea of TEAM EFFORT. That means respecting every person, their time and their value when they step on to my set or partner with our production company. And like with any team — that’s a family — there’s gonna be conflict. Family is gonna have differences of opinion and fundamental core beliefs. To me, conflict can be a good thing, when its followed by great resolution. I was raised on healthy conflict and welcome it. And like any family, we get better from it. At the end of the day me and #F8 co-stars all agree on the most important thing: Delivering an incredible movie to the world. #Fast8 #IcemanCometh #FamilyGrowth

Johnson is evidentially trying to backpedal himself out of the public mess he ensued, and hopefully any ill-will shared among his XY-sharing co-stars is cleared up. In any case, The Rock said his blood might genuinely be boiling in a few scenes, so even if there are some grievances left unattained, it should at least result in a better film, directed by F. Gary Gray (Straight Outta Compton). We’ll have to find out for ourselves when Fast & Furious 8 (a.k.a. Fast 8) hits theaters on April 17, 2017.