Director Colin Trevorrow has confirmed that Star Wars: Galaxy’s Edge does feature an element from his version of Star Wars: Episode IX that was scrapped at Lucasfilm.

Star Wars: Galaxy’s Edge transports fans to the never before seen Black Spire outpost on the outskirts of wild space. While the Star Wars themed park expansion is separate from the galactic history we’re familiar with, the land features tons of easter eggs and connections to the films and animated series. It even features a brand new ship known as the TIE Echelon which Colin Trevorrow confirmed to Collider was something he developed for his version of the upcoming Episode IX. Colin Trevorrow explained:

“It was just a natural part of the process. The Imagineering team asked us to develop a new ship for the park while we were designing the film. I took it pretty seriously—it’s not every day you get to be a part of something like that. They let me see what they were working on, so I got to see what Galaxy’s Edge was going to be. I think what they’ve created is incredible. It’s such an immersive experience.”

Colin Trevorrow went on to reveal how exactly the Tie Echelon factored into the film, shedding some light on the inspiration for the ship’s design:

“It was part of an upgraded First Order fleet. An armed troop transport—the equivalent of a Blackhawk stealth helicopter. We wanted it to evoke memories of earlier ships while still being its own thing. If you look at the elements, it’s kind of a hybrid of designs from VII and VIII, with some familiar elements from OT Tie Fighters like Vader’s Advanced x1. There’s a lot of history in it.” 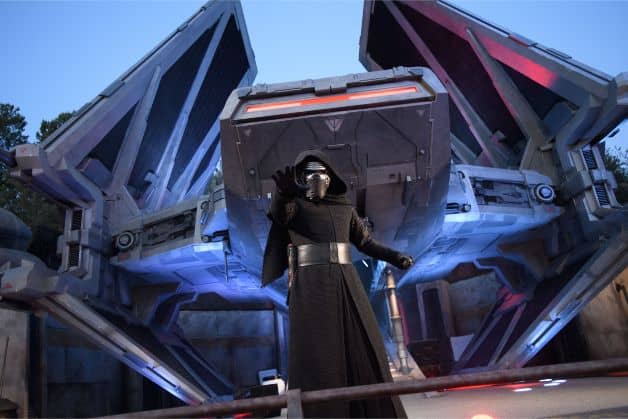 Lucasfilm announced in September of 2017 that Colin Trevorrow would no longer be directing Star Wars: Episode IX. Colin Trevorrow himself had originally wrote the script for the final chapter of the Skywalker Saga before screenwriter Jack Thorne was tapped write a new draft. Colin Trevorrow’s exit was announced as a mutual decision due to creative differences between the director and Lucasfilm. Reports suggested that the relationship between Colin Trevorrow and Lucasfilm president Kathleen Kennedy had become unmanageable. Ultimately, The Force Awakens director JJ Abrams returned to helm Episode IX from a script he co-wrote with Chris Terrio (Argo, Batman v Superman).

So what do you think about Disney’s decision to still feature a ship from Colin Trevorrow’s version of Star Wars: Episode IX at Galaxy’s Edge? Let us know in the comments below!

Full plot details for Star Wars: The Rise of Skywalker are currently under wraps, though the film is set to conclude the Skywalker saga before the franchise takes a three-year hiatus from theaters.

Here’s Everything We Learned At Star Wars Celebration Chicago

Star Wars Celebration Chicago was a blast and now that it's come and gone we've got the lowdown on the most important things from the convention.

Star Wars Celebration Chicago has come to a close and we were lucky enough to attend and see all of the amazingly cool things the Galaxy Far, Far Away has in store for us. The convention was pretty eventful as a ton of announcements were made and we got the scoop for you right here if you missed any of it. While at Stars Celebration, we attended a bunch of different panels, including Star Wars: Episode IX, Galaxy's Edge, Star Wars Jedi: Fallen Order and The Mandalorian.

You can hit "Next" to find out everything about Star Wars Celebration Chicago.

The biggest thing to come out of the convention is the Star Wars: Episode IX teaser trailer. The panel for the final installment of the Skywalker saga gave us our first look at the film and the film's official title. Star Wars: Episode IX will be titled Star Wars: The Rise of Skywalker and it looks pretty damn dope. The first trailer revealed new looks at Carrie Fisher, Daisy Ridley, John Boyega, Oscar Isaac and Adam Driver in the film. It also revealed that Ian McDiarmid will return as Emperor Palpatine. The look and feel of the film screams J.J. Abrams and I think fans of the franchise will be extremely excited for the future of Star Wars.

You can check out the first official trailer for The Rise of Skywalker here.

On the second day of Star Wars Celebration Chicago, Disney revealed a cool new look at their Star Wars park and their new First initiative that focuses on advances in technology. During the panel, some of the rides were previewed, including The Millennium Falcon: Smugglers Run and Rise of the Resistance. Smugglers Run will let attendees control the Falcon and you'll be able to see the full ship in all its glory at the spaceport. Meanwhile, Rise of the Resistance will put you face to face with Rey, Finn, Poe, Kylo Ren and BB-8. You'll also be able to go toe-to-toe with the First Order. Galaxy's Edge will be a fully immersive park and there will even be an app that allows you to unlock hidden features called Play. You can buy costumes and create your own lightsaber at the park for a fully immersive experience. As far as food and beverages go, there will be blue and green milk as well as an assortment of foods made especially for the park, including cool new bottles for Coca-Cola products. There will also be a few familiar voices and sounds as Frank Oz will reprise his Yoda role, Star Tours DJ Rex will be on the 1s and 2s at the Cantina and John Williams will compose new music for the park. Everything we saw of the park looked stunning and I believe we're in a time where this park could hit Westworld levels.

After the Galaxy's Edge panel was finished, we got to check out the panel for the next big video game in the Star Wars saga. Star Wars Jedi: Fallen Order should be a breath of fresh air to fans as it's a single-player story focused on one character. That character is named Cal and he's a former Padawan that survived Order 66. The story trailer revealed the Inquisitors and the new Purge Troopers. Shameless and Gotham Star Cameron Monaghan is bringing Cal to life and he even came out on stage and surprised all the fans in attendance. What was shown from the game looks pretty good and we were told it will hit stores November 2019.

You can check out the first official trailer for Star Wars Jedi: Fallen Order here.

Nothing during Celebration shocked the crowd more than the panel for The Mandalorian. Kathleen Kennedy, Dave Filoni and creator Jon Favreau hit the stage and we weren't ready for what was about to happen. Favreau brought a cool behind-the-scenes featurette and the first official footage from the series focusing on Pedro Pascal's main character, Gina Carano, Carl Weathers and many more. What they revealed was beautiful and the series features some of the best cinematography I've seen in the Star Wars universe. The cast hit the stage and revealed key details about their characters, including concept art, official stills and their names. Gina Carano will be playing a former Rebel Shocktrooper named Cara Dune and she's a force to be reckoned with. Carl Weathers is on board as Greef Carga, a character who runs a guild of bounty hunters. He's looking for someone to go after a product and he finds Pascal's The Mandalorian. Before the panel ended, Jon Favreau revealed a 5-minute scene and a brief sizzle reel that featured a brutal, gory and scummy first look at the series.

The Future of Star Wars

Episode IX marks the end of the Skywalker Saga and that means fans are officially looking ahead at the future of Star Wars. Game of Thrones showrunners David Benioff and D.B. Weiss are working in their own corner of the galaxy and fans are even speculating that their films will take place during the time of The Knights of the Old Republic. In a recent interview, Lucasfilm head Kathleen Kennedy stated that Weiss and Benioff will work in tandem with Rian Johnson on their new series of films. As you all know, Rian Johnson is working on a new trilogy of films that will be separate from the Benioff and Weiss projects, so it makes sense that they'd work together to flesh out the universe. After The Rise of Skywalker, be on the lookout for a minor hiatus for Star Wars films as Lucasfilm begins development on two new series of films.