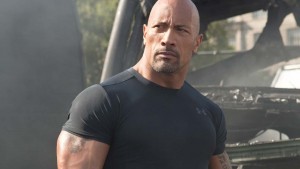 Uh-oh. It seems Dwayne “The Rock” Johnson found himself on the wrong side of the law in Fast & Furious 8. At least, that’s what the latest photo from the action sequel suggests. The actor released an official from the currently-filming blockbuster on his official Instagram, and he has some choice words for what’s set to come for his character, Luke Hobbs.

“The Iceman cometh,” Johnson said. “And don’t fucketh around.” While Hobbs has been on the right side of the law since he first appeared in Fast Five, something must have gone down between films. Of course, it’s possible Johnson’s character is merely going undercover to land a few bad guys, but we won’t know for sure until we see some actual footage. This isn’t our first look at Hobbs in the new film, as The Rock also released another photo a few months back.

Here’s the newest look at The Rock in the upcoming film.