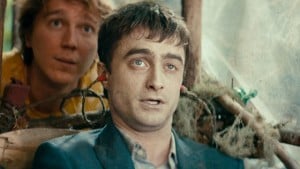 To describe Swiss Army Man and its excellence would be a fool’s errand. It’s a film centered around a corpse, played by Daniel Radcliffe, that talks and farts, among other specialities, and it’s also one of the most poignant, heartfelt and genuinely touching films of the year. That might sound like a joke, but it’s 100 percent true. Call me crazy. Call me inept. Say what you will. But I’ve seen no film this year quite like Swiss Army Man, and I doubt I’ll see many that I like more. It’s not only one of the best fart jokes in the history of cinema, it’s one of the most haunting, original and thoughtful films I’ve seen in ages. And yes, I’m still referring to the film where Harry Potter is a farting corpse. No regrets. Creditability be damned.

The feature debut of The Daniels, known best for their energetic “Turn Down For What” music video, Swiss Army Man plays like a fever dream, though one you don’t want to escape so quickly. Also starring Paul Dano and Mary Elizabeth Winstead, it’s a hyper-surreal piece of absurdism that can only really be understood in the moment. It’s the kind of film that’s at once beautiful and strange, uncomfortable and inviting, unusual and very sweet. Edited at a brisk pace and featuring what I consider to be Radcliffe’s best, most daring performance to date, it’s an endearing crowdpleaser if you’re with the right audience, and it’s a exceeding triumph in originality, individuality and personal perseverance. It’s unquestionably one of the finest movies I’ve seen this year, if not the past couple years. And no, I’m not just farting around.