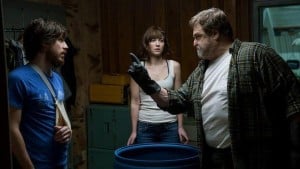 There have been some truly incredible directorial debuts this year, and I’ll discuss more than a few with this list. But 10 Cloverfield Lane, Dan Trachtenberg’s first feature film, is among the most assured and confident to come in ages. The J.J. Abrams-produced chamber pulse-pounder is clearly inspired by Hitchcock, and uses the master’s signature use of suspense in the service of character and story to ratchet up the tension and build upon the mystery. And featuring two more great performances from Mary Elizabeth Winstead and an Oscar-worthy John Goodman, it’s a monstrously good time.

Asserting the Cloverfield name like The Twilight Zone, Tales from the Crypt and, fittingly, Alfred Hitchcock Presents would have at their respective times, 10 Cloverfield Lane continues to elevate the promise of a cinematic anthology series, perhaps not unlike the ones we see on TV these days with True Detective, Fargo and American Horror Story. The DNA of the 2008 underground hit is seen throughout Trachtenberg’s film, but it’s also entirely its own beast — as well it should be. And while the ending isn’t quite as satisfying as the rest of the film, it never completely loses itself in the process. This is an exceptionally well-made, terse and deeply-enticing genre piece, and a massively promising debut from Trachtenberg. That guy is going places.