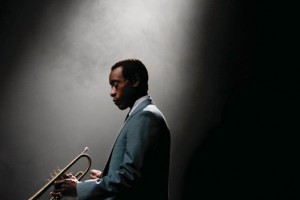 When actors make the transition to directing, the results vary — to say the least. Sure, Ben Affleck, Clint Eastwood, George Clooney, Kenneth Branagh and Jon Favreau found a second calling in the hot chair, but there are more-than-a-few that don’t quite rise to their levels. For instance, Nicolas Cage didn’t quite find a calling behind-the-camera with Sonny, nor did William Shatner really soar with Star Trek V: The Final Frontier. Also, James Franco has yet to make his first good film as a director, and I believe he’s made, like, 50 already, with 14 more in development. And while Don Cheadle certainly proved himself as a veteran of his craft, he remained unproven as a filmmaker, especially when tackling something as thorough and daunting as the life of blues legend Miles Davis. But more so than other actor-director projects of late, Miles Ahead really, truly finds Cheadle at harmony with his newest craft.

The long-gestured passion project wisely choses to look at the musician from a section of his life, rather than studying it on the whole. What results is a biopic that’s stylish where others are merely drab, spunky where others feel clunky and one that’s appropriately jazzy from beginning-to-end. Complimented nicely by an always-good Ewan McGregor in a supporting turn, Cheadle not only excels as a filmmaker, he provides one of his best performances to date as Davis, portraying the troubled musician with equal parts sorrow and soul, quiet and boisterous, and one that wasn’t afraid to make an impression, not matter where he went. What it lacks in complete believability it makes up in electricity in its eccentricity.

There’s a thunder in its step, but most of all, it feels alive. It ravishes with a beating pulse, and it makes you feel in the moment, bouncing between moment-to-moment with the allusive music superstar. Not everyone can make it in the world of directing, but Cheadle really proves himself a man of multiple talents with Miles Ahead — which makes him the right choice to bring Davis’ life to the big screen.