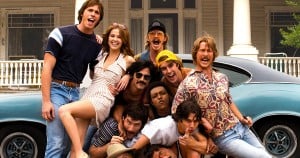 There’s nothing quite like a great Richard Linklater movie. The writer/director doesn’t always nail it, but when it gets it right, he’s in a league of his own. And he simply crushes it with Everybody Wants Some!!, his spiritual successor to his status-defining Dazed and Confused. As simplistically rich as it is graciously philosophical, it hits all the great earmarks of a wonderful Linklater film, while still providing the most enjoyable, easygoing romp of not merely this past spring, but the whole year so far. Carried by Linklater’s signature laid-back charm, and bolstered by a winning script, great young performances from Glen Powell, Wyatt Russell and Zoey Deutch, and a rockin’ ’80s-centric soundtrack, this college comedy instantaneously whisks you into this time and place and it doesn’t let you go. But why would you want to leave? It’s got beer, great music, husky young men, beautiful young men, an aversion to discipline and a thirst for fun. What more do you want in a movie? More importantly, what else do you need?

Everybody Wants Some!! feels like a high in the moment, and it plays like a fond memory in recollection. As such, it captures the joy of the cinema at its fullest. It’s level-headed, unafraid, poised with confidence but open to suggestions — resulting in a film that makes you feel like you’re in-the-moment, watching all the good times roll and trying to soak up all the splashy fun, especially as it comes to a close. But much like college, the fun can only last so long, and you have to go back to the miserable real world. What a bummer, man. So treat yourself to a nice, refreshingly honest and eagerly quick-to-please film like this one right here. It’s got something for everyone to like, and it shouldn’t leave you disappointed.