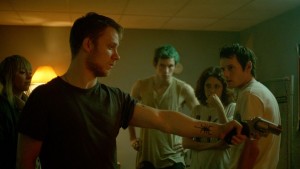 Unrelenting, taunt and prone to vicious violence, Green Room is a downright brutal film. Writer/director Jeremy Saulnier (Blue Ruin) crafts a relentless, appropriately gritty tale of punks vs neo-nazis, resulting in an exceptionally heart-pounding potboiler thriller that’s not easy to shake. Some have called it excessive and unpleasant, and they’re not entirely wrong. But that’s also kinda the point. Much like our young musicians, The Ain’t Rights, this movie doesn’t stop without a fight, and it isn’t afraid to get its hands dirty in the process. As malicious as it can ultimately be, however, it also serves as another promising showcase for the exceedingly talented Saulnier, while also unintentionally becoming one of the last films from the late, equally talented Anton Yelchin.

When I watched Green Room, I looked at Yelchin’s performance as just the beginning. It was set to be another stepping stone in his rising professional status, and while it’s unclear if he would’ve lived up to his promise in later years, it’s clear he had the talent to back it up. Anchored by strong supporting performances by Imogen Poots, Alia Shawkat and Patrick Stewart, Yelchin lead this nifty little indie to the finish line with earnest admiration and sheer determination, and it’s only more saddening to know we won’t see many more films with that spirit from him. At any case, Green Room is a film well worth watching, especially in the confines of an enclosed theater, but it’s especially worth watching now, to see the rising talents of Saulnier and the once glimmering hope found in Yelchin’s natural performance.