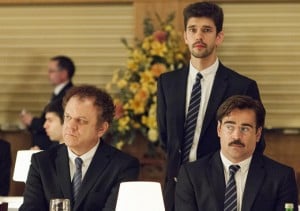 The Lobster is an alienating film. It’s that way by design, though. It’s weird, it’s unsettling, it’s bizarre, and it’s deeply uncomfortable at times, not to mention filled with pure oddities at every available moment. And that’s what ultimately makes it so beautiful.

The fifth film from the surrealist writer/director Yorgos Lanthimos (Dogtooth), the absurd dramedy is as unconventional as it is telling. It’s a singularly charming, almost disturbingly haunting dystopian examination of our love-sick culture, inviting us into a world known only as The City where our recently-single mustached introvert David (Colin Farrell) must learn to accept one of two realities: find love amongst a group of strangers, or become an animal of his choice. Little does he know, however, that his true love might be away from the colony, and one that isn’t accepted by anyone other than themselves. It’s a very mediative film, filled with striking commentary on our excessively demanding society, but one that doesn’t feel the need to explain itself, or provide neat answers for the questions it produces, and one that doesn’t even need to make any sense at all.

It’s as awkward as it pleases, as disagreeable as it peculiar and never quite as simplistic as it seems. But where that might make any other film worse, it actively makes The Lobster even better. Also featuring strong supporting turns from Rachel Weisz, Olivia Colman, Lea Seydoux, Ben Whishaw and John C. Reilly, it’s an astoundingly memorable film in a year where barely anything stays in the consciousness, and a wonderful achievement in singularity. The pitch-black satire, amongst the driest and often bleakest you’ll see this year, will either turn you off instantaneously or immediately win you over. As you might have guessed, I’m firmly in the latter crowd. The world of The Lobster is a cold, confusing, sometimes miserable place, but it has a lover in me. And it’ll make sure you never feel completely alone again.